You have an employee who has left and moved on elsewhere. You provided a short and quite favourable employment reference. However, his files have now been looked at closely and it has been discovered that his record keeping was not the best – there are lots of errors and he has stated jobs have been completed when they were not.   You now receive a more detailed reference request from the new employer containing specific questions – What was the reason for leaving?  Were there any weaknesses?  Are you under a duty to answer these questions?

This is a very common scenario and most of us know that there is usually no legal obligation to provide an employment reference but if one is provided then you owe a duty of care to both the ex employee and the new employer. There has been much litigation in this area and the fashion now seems to be that employment references have been reduced to a mere “start date, end date, job title upon leaving”.  However, what happens if you provide more?

In providing the reference Mr Jackson’s former manager failed to reply to a question regarding whether she would re-employ Mr Jackson in the future and, in response to a question about Mr Jackson’s weaknesses, she stated that “There were some issues identified by his team manager in respect of recording and record keeping… This would have led to a formal improvement plan to assist Mark to make improvements in this area. Mark left the service before this process was instigated.”

When this reference was received, Sefton Borough Council made a telephone call to Liverpool City Council who explained that, following Mr Jackson’s departure, employees who had taken over his cases had raised some concerns that certain work and contact with individuals had not been carried out, even though the records suggested it had been done. However, it was also made clear during the telephone conversation that these allegations had never been formally investigated and Mr Jackson had been given no opportunity to comment on the allegations.

Sefton decided not to appoint into the new role and Mr Jackson pursued a claim of negligence against Liverpool City Council for damages in relation to the reference it had provided.

The  Liverpool County Court initially found that, although the reference provided was accurate and true, it was ultimately unfair as it carried with it an unanswered, uninvestigated allegation which implied that Mr Jackson was unfit for employment and which Mr Jackson had no opportunity to respond to. There was therefore a failure in the duty. Liverpool City Council appealed.

Learning point: This case is welcome relief for employers providing references. Concerns about lack of performance (or even potential misconduct) can be referred to in answers to specific questions – However it should be made clear whether these have been fully investigated. The more contentious the information provided, the more risk and the more likely a Court may find that the information provided created an unfair impression and therefore was a breach of duty. Proceed with caution.

Manufacturing companies are showing the greatest resilience to the weak economy and have increased their usage of temporary agency workers by 80%, year on year.

The figures relate to those with “critical” issues such as facing county court judgments totalling £5,000 or a winding up order, or “significant” problems, with court actions pending or out-of-date accounts. Print and packaging firms stress fell by 73%, food and beverage producers’ by 37%, and other manufacturing businesses by 49% year on year.

Depoel, the master vendor organisation’s data shows that the usage of temps has increased by 80% year on year – supporting the research from Begbies.  These figures are also bourne out by Abbey Personnel Services’ increased demand for temps in this sector.

Announcements such as Nissan starting manufacture of a new model in the North East, creating 1,125 jobs in the sector are likely to have buoyed confidence too.

Currently using another recruitment agency to source your flexible workforce?

Anticipating a sudden rise in your requirements?

It’s good to keep us all on our toes from time to time. Wouldn’t it be great if you could do this in a useful manner which may raise your workforce standard at the same time?
Abbey Personnel are expert suppliers of a flexible workforce and happy to work in many different ways.
In recent months Abbey Personnel have been asked to aid the requirements of large fluctuating workforces as a secondary supplier. Certain cases sometimes require more than one supplier due to the nature of work. We are more than happy to aid you. It has even been said that the quality of our service has raised standards on site.

You may have used Abbey Personnel in the past already and have seen first hand the benefits we can provide and the flexibility we can provide. As a provider of an extremely efficient, speedy and agile service we have vast experience in providing flexible workforces to organizations across the board of fresh produce sector.
Abbey Personnel have even previously aided major retailers supply chains.

As we run our own minibus service with an Operators License we are able to support your current supplier within extremely short lead times. Often delivering additional staff to your site our self via our minibus service.

Having earned the trust of our clients since 1999 we are confident there are few companies within the Fresh foods sector we could not aid in their search for flexible workforce, even on extremely short lead times. Perhaps we could help you in more ways than you may expect. From ad-hoc supply through to permanent supply Abbey Personnel are capable of taking on the biggest and smallest challenges at the shortest of notice. If you would like to know more about how we may be able to aid you in the future please do not hesitate to contact us via email or telephone.

Other research, cited in the report, showed between 1998-2004, 54% of managers believed workplace performance was better when using temporary agency workers, compared with 44% among those who employ only permanent staff.

Here at Abbey Personnel we like to give back every now and again.

So we’re offering you the opportunity to get your hands on an iPad 2 or another great prize just by referring us to a colleague, friend or contact you know!

How do I refer?
All you have to do is ask your friend, colleague,  contact or who ever else you may have passed the word onto to give us a call and place a temporary or permanent position of employment with ourselves.

To qualify as a referral we must not have had dealings with the person/company referred in the past 18 months.

What do I get?

Upon a successful referral two great things happen. Not only do you get a great sense of achievement for passing a great opportunity onto your colleagues and friends but you also receive an Ipad 2 OR something of equal value!

If you’re really in a giving mood we will even pass the money onto a charity of your choice!

How do I/we get the prize?
As soon as the criteria is met, we will either deliver your prize personally or send it by courier.

When do I receive my reward?
You will receive your award:

Important note!
We are a very honest and ethical Professional Recruitment Company and whilst we actively encourage you to scour your little black book of social connections for potential great people who we can help we will not accept the introduction of candidates from our existing client base.  So if you currently work for a company who Abbey Personnel Services supplies please do not refer your work colleague’s.

Abbey Personnel have recently been recognised as a provider of market leading, quality and fast recruitment providers. Proving ourselves to be up to the high standards of the ISO9001!

Having been recruitment providers of market leading quality and speed for 13 years, we have now been granted recognition with an internationally recognised and coveted certification. In order to prove this we were required to undertake a strenuous audit which looked at the procedures we undertake and made sure they were beneficial to not only us, but the client as well.

ISO 9001 was first introduced in 1987 and requires organisations to demonstrate that they do exactly what they say. Having also checked our management in order to ensure consistency and improvement, we are required as a certified organisation to commit to continuous improvement and are assessed annually to ensure progress is being maintained.

The ISO9001 requires that we not only have procedures in place but that we stick to them and perform them in the most professional and efficient manner.

Working with the British Assessment Bureau we put together a set of standards, processes and systems based upon the Employment Agency Standards Inspectorate.

In doing so we aimed to ensure our clients and the workers we provide are protected by a 100% compliant labour provider, with extremely accurate and robust systems in place.

This means that as a company not only are we sure we’ll get it right first time, but you can be also.

If you would like to know more about our achievement or  how we can help your business recruit the right people at the right time. Call us on 01757 212 020

It’s just like our usual service – you will still be dealing with REC certified consultants, and we still refuse to cut any corners – but now you pick the bits you want, leave the rest out, and you only pay for what you think is important in finding you the right person for the job! 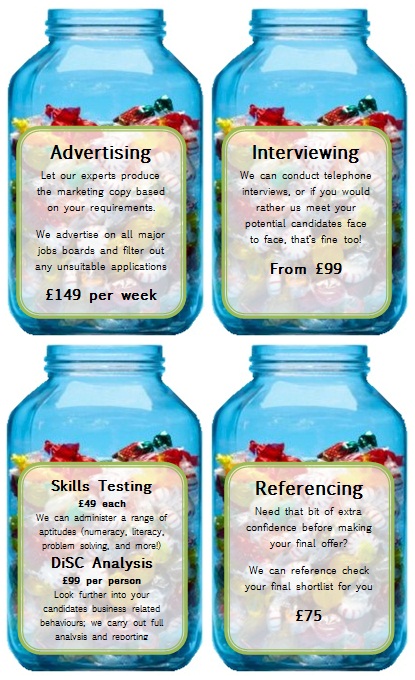 This offer applies to all vacancies with a salary up to and including £20,000 per annum

Enjoy our belated posting of the November e-News from the Abbey Personnel Team – We are all systems go with the Christmas rush!

Find us around the Web!

Visit us on LinkedIn